Ramadan 2021 in the Philippines

Ramadan 2021 in the Philippines. MANILA – A Bangsamoro official announced Sunday night that Ramadan will begin officially on Tuesday, April 13. 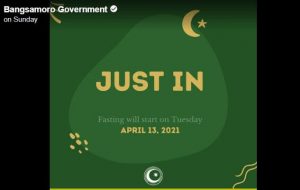 People fast during the month of Ramadan and abstain from alcohol, smoking, and s*x from dawn to dusk.

A fast is only broken with an early morning meal known as Suhur, and an evening meal iftar.

It is a time of reflection and prayer during Ramadan for Muslims.

Ramadan is a fundamental tenet of Islam.

Muslims celebrate this time between 29 and 30 days before the festival Eid ul Fitr, in which the power of the Shawwal Moon is visible.

According to official data in the Philippines, Muslims make up 6 percent of the country’s 100 million people.

Muslim community members will be celebrating Ramadan under community quarantine in the country for the second year in a row due to the COVID-19 pandemic.