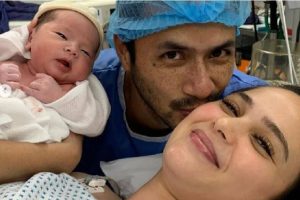 Hermosa’s husband Oyo Sotto announced the happy news in an Instagram post and thanked those who prayed for the safe delivery of their baby boy.

The celebrity couple announced last December that they were expecting their ‘Baby No. 5.’

Hermosa gave birth to her first child with Sotto, Ondrea Bliss, in 2011.

The two then adopted a son named Kristian Daniel. In 2014, they welcomed their second biological child, Kaleb Hanns.

In 2016 Hermosa and Sotto welcomed their fourth child, Vin.

Sotto, the son of veteran comedian Vic Sotto, married Hermosa in January 2011. They first met in 2004 when they starred in the first “Enteng Kabisote” movie.