In the viral video, a Muslim girl with a hijab could be seen arriving at her college on a scooter. As she walked towards her class after parking her scooter, a group of Hindutva supporters began to mock her hijab by chanting ‘Jai Shri Ram.’ Unperturbed by the terror unleashed by BJP supporters, the girl stopped to shout ‘Allahu Akbar.’ 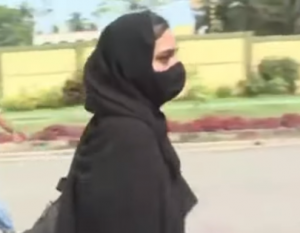 The video was shared by journalist Imran Khan, who wrote, “#KarnatakaHijabRow when a #hijabi student arrives at PES college in #Mandya. She gets heckled by students wearing #saffronshawls chanting #JaiSriRam. She raises her hand says “#AllahuAkbar before being escorted by college staff.