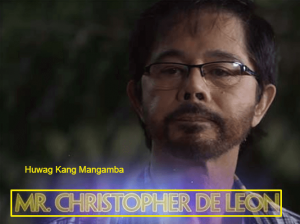 Having done projects for GMA-7, Christopher de Leon returns to ABS-CBN. This will be his first role since Ian Veneracion left the prime-time series Huwag Kang Mangamba.

Today, September 28, ABS-CBN and Dreamscape Entertainment released a teaser about Christopher’s character. In the teaser showing the new character, Christopher is wearing the same clothes that Ian wore.

The afternoon series Love Thy Woman was Christopher’s last project at ABS-CBN. The Kapamilya network has pushed through with multiple projects, including “Love Thy Woman,” despite franchise woes in June 2020.